Friedl Dicker-Brandeis (b. 1898) studied in Vienna with Franz Cižek before moving on to the renowned Bauhaus in Weimar in 1919. Johannes Itten, Paul Klee and Wassily Kandinsky were among her most influential teachers. In 1923 she and another former Bauhaus student, Franz Singer, set up a studio for interior design in Berlin and, later, Vienna.

The twenty-five years of life that were now left to Friedl Dicker-Brandeis were increasingly taken up by her activities as a painter. In this relatively short time, she painted politically themed pictures, portraits and landscapes in the style of Neue Sachlichkeit (New Objectivity). The dramatic circumstances created by racist persecution were to determine the framework for her continued creative activities from the mid-1930s. In 1942 she was deported along with her husband Pavel Brandeis to Theresienstadt/​Terezín. Children’s drawings from the ghetto document her task giving art lessons to children.

Putting on display drawings, paintings, photo collages, film clips, weaving patterns and blueprints for furniture and buildings, the exhibition provides an overview of the artist’s multifaceted work. Encouraging comparison, the exhibition casts light for the rst time on Friedl Dicker-Brandeis’ special place in Avant-Garde Art. In deeply moving film documents some of her contemporaries recall the tragic life of the artist. She was murdered in October 1944 in the concentration camp at Auschwitz alongside many of the children she had taught there. 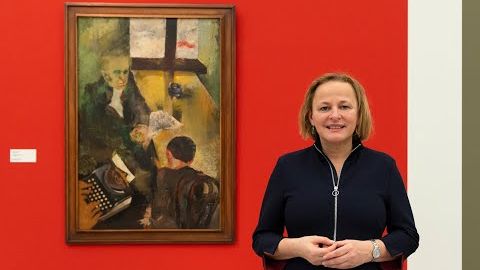 With support of
Current